Last summer we declared Olly Bentley as our ultimate backpack wanker. His prize? A trip to Australia (on our two week East Coast Tour, HELLO!) with three of his best mates. (Yep, we absolutely hate him - the little squirt).

Now they're halfway through their tour, Olly's managed to make us all incredibly jealous by letting us in on what Helen, Tom and Declan have been up to...

Olly: After a long flight we arrived 'Down Under', wahay! Once we'd dropped off our bags we began exploring the city, walking through the beautiful botanical gardens which led us to the infamous Opera House. The view was so spectacular we decided to sit with a few beers to soak up the sunshine and the surrounding harbour.

We couldn't leave Sydney without completing the Sydney Harbour Bridge Climb! We were all a bit nervous at first but our great tour guide Conor made us feel at ease and told us all about how the bridge was made (including those who died in the process!). After a long day we then headed to bed in preparation for the start of the tour. 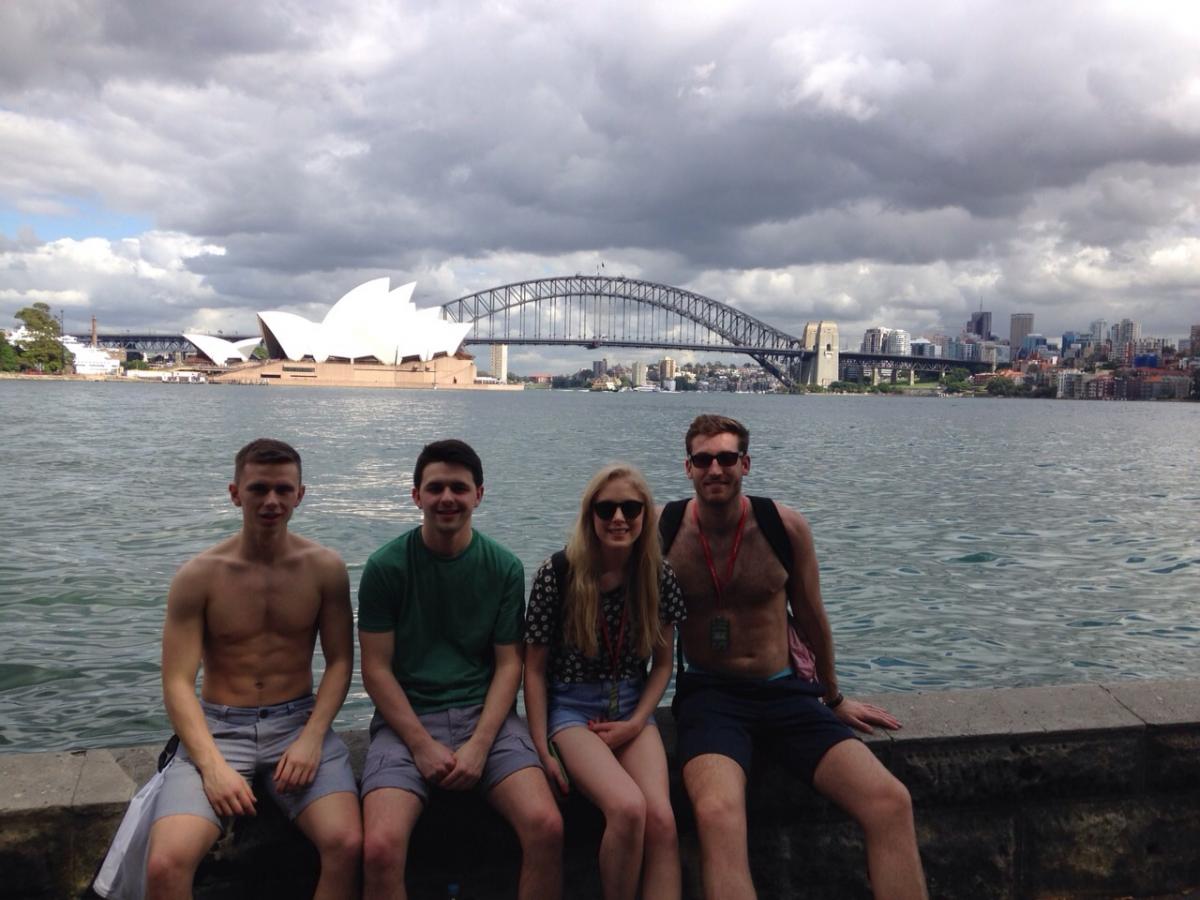 Day 1: We woke up at the crack of dawn ready to meet everyone on the East Coast tour. We were introduced to Alan, our tour guide, and Helen had an immediate man crush on our new surfer dude mate.

After some enthusiastic introductions to everyone on the tour, we headed to Hunter Valley Wine region where we immediately started drinking, which was a great way to ease the nerves. We got stuck in to some real grape squishing in sunshine without our Canadian counterparts, making and drinking our own wine.

Straight back on the bus we headed up to Crescent Head Surf Camp, the most chilled out place on earth. Rosco and Sally put on a banging BBQ where we chilled in hammocks with a few cold beers and played some "friendly" games of football with the Tour Crew! We rested up with a full day of surfing on the horizon which we were all massively looking forward to!!

Day 2: After a great breakfast with everybody, we donned our rashies, threw the boards on the top of the bus and headed for the beach at crescent head.

The waves were amazing and everyone was paddling out like pros. After a lot of trying and failing we eventually got up on the boards and never looked back. The new lifestyle definitely suited us down to the ground. We all caught the surfing bug and couldn't wait to head straight back out.

We headed back to the camp and were straight back on the bus heading to Byron Bay for more surfing, surfing and surfing! 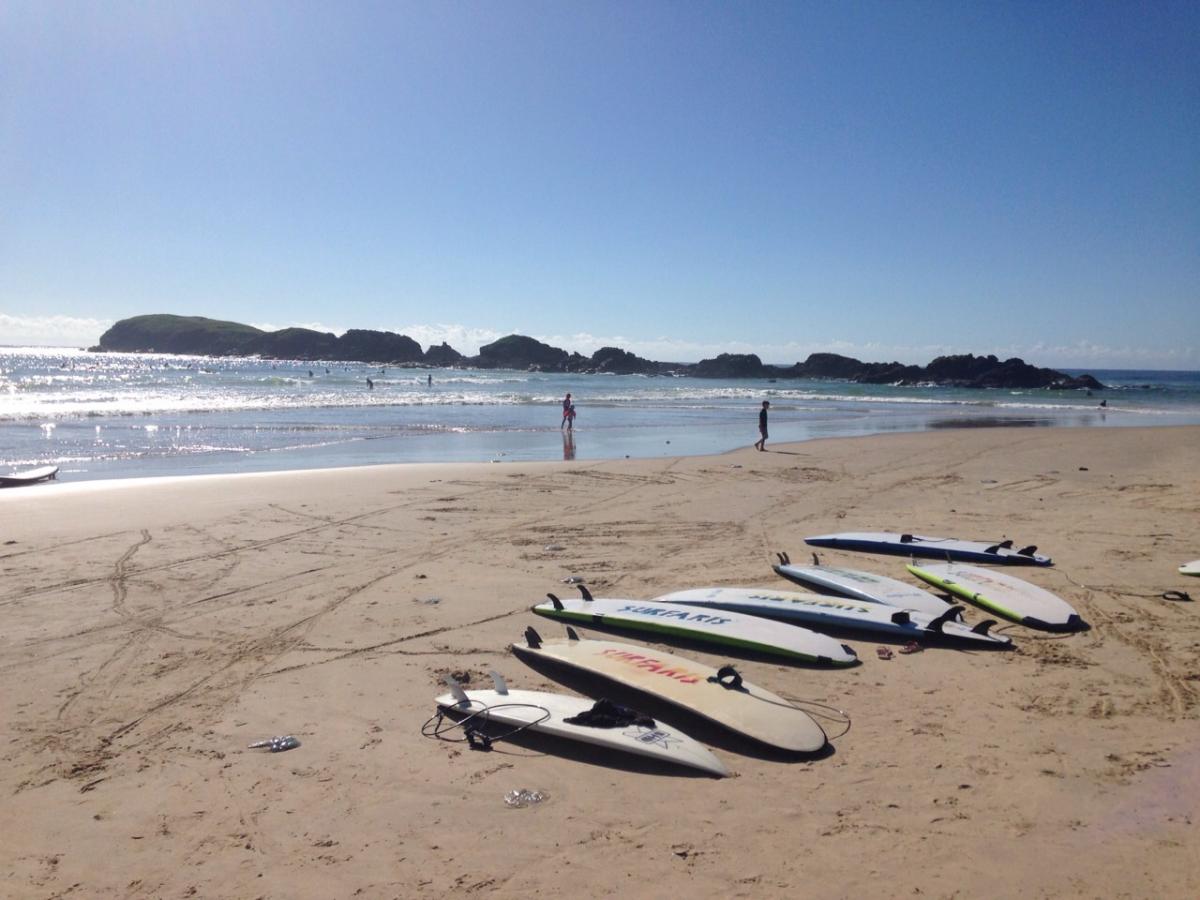 Who else fancies catching a few waves? (Us, us!)

Day 3: The best so far!!! We all stupidly decided to wake up at 5am and go and jump out of a plane.

The most insane 4 hours of our lives!!!! We were picked up by the shuttle bus down to SkyDive Australia airfield, to jump from 14,000 feet, the highest skydive in Australia! We drew straws on who would go first, Dec (as usual) lost.

Everyone was introduced to their skydiving instructors and it was smiles all round until Olly's instructor to one look at the 6 ft 6 giant turned round and bolted for the exit!! He sheepishly returned and we all headed for the plane. It took about 20mins to get to the required hight which gave us amazing views of the Bryon Bay coast line. It wasn't until we all watched Dec fall at high speeds that we realised what we were about to do! However after the initial fall the dive was incredible and we were all buzzing for hours afterwards. 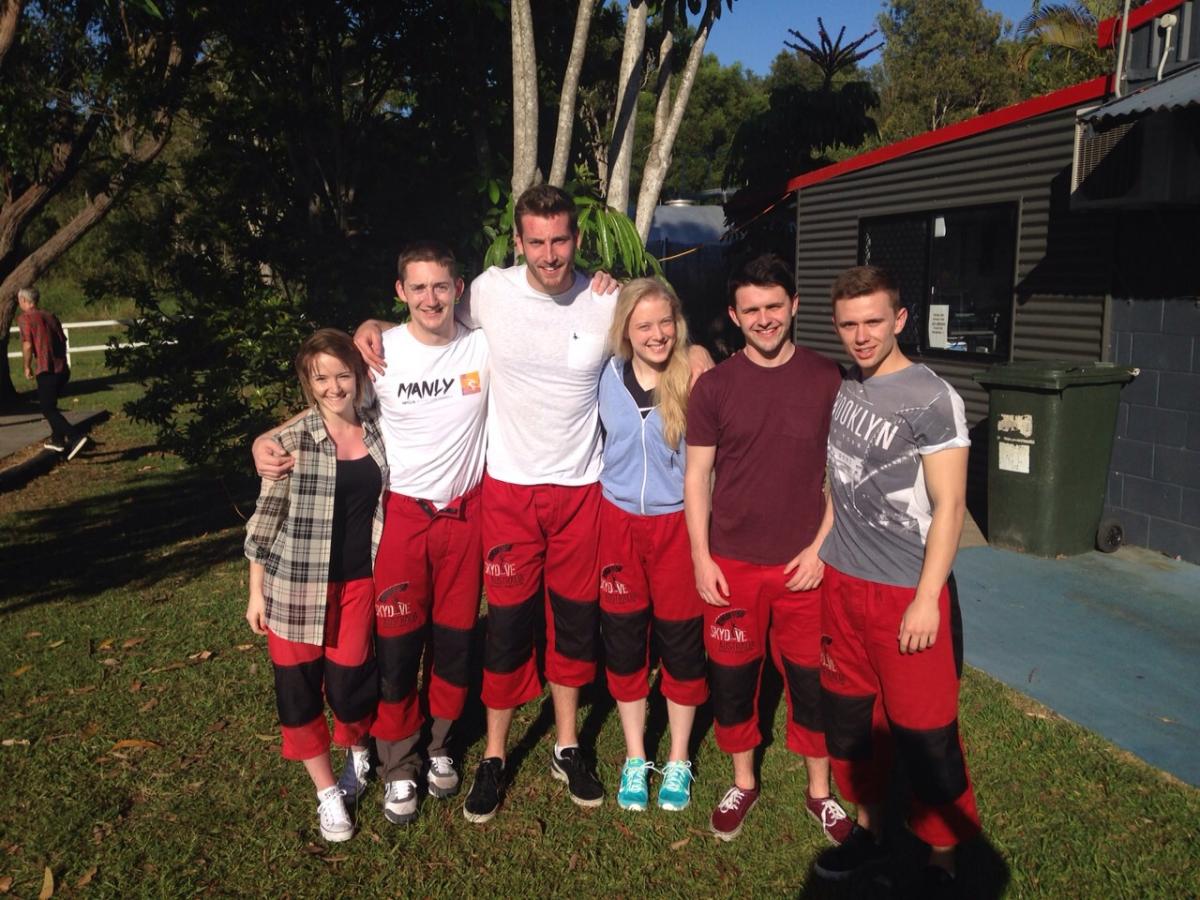 That wasn't enough for the day though, more surfing was on the agenda! After some pretty fierce waves on the first try, this time round it was much smoother, and we were standing up pretty much every time.

A big night out was planned in Byron, but a "30" minute power nap turned into 7 hours and we were publicly humiliated as the only Brits who didn't make it out, in true backpack wanker fashion!

Day 4: Yesterday we had to say goodbye to New South Wales and head towards Queensland, remembering to turn back our clocks an hour. According to Alan (a true NSW resident) they are an hour and ten years behind, warning us that they can be a bit backwards in their ways. We stopped off at Springbrook National Park for an adventurous rainforest walk where we learned all about the Strangling Fig Trees. The walk ended at a spectacular water fall which had worn through a large rock. We then headed to Surfers Paradise, a very glitzy image conscious area of the Gold Coast, where we stayed in a nice hotel by the beach. However in true wet season style, the heavens really opened during our stay here but it didn't stop us having a great time on the beach and burying Tom up to his neck. In the evening we all went for a delicious steak dinner with some scooners. This was followed by a few games of bowling and drinks in a bar whilst dancing to live music till the early hours. We finally proved ourselves as Brits that can party hard and regained our dignity from the Bryon Bay incident...

Catch up with Olly, Declan, Helen and Tom when they blog about the next part of their trip in a few days time...