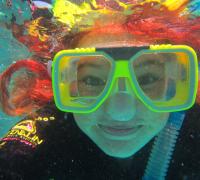 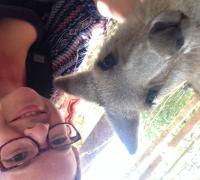 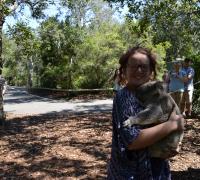 It was straight off the plane from new Zealand and then on to the first greyhound bus to Byron Bay! Only a short 14 hour bus ride overnight to our destination. It really does enlighten how big Australia is! Luckily as I was so tired from the night before being on a plane, I pretty much slept the whole way through.
First stop Byron Bay! It's the hippie central of Australia with loads of funky bars and shops where you can get your palm read as well as a massage! We had a surf lesson booked on our greyhound pass which Becky absolutely loved, I think she's contemplating turning pro!
After Byron it was on to Brisbane, where my favourite stop was... Australia Zoo! Honestly the best zoo I've ever been to. I got to hold a koala, as well as a crocodile! There were all kinds of crocodile and native Australian animals, not to mention ample opportunity to cuddle up to a roo.
After Brisbane it was back on the bus to Noosa, this is where the tour to Fraser Island started! Fraser Island is a beautiful sandy island where you can go on 2/3 day self driving tours, where you get to drive the 4x4 along the sand and inland tracks, I didn't fancy the inland tracks but driving along the sand was amazing! Great place to spot some dingoes and shipwrecks :-)
After Noosa it was time for the Whitsundays boat. This left from Airlie Beach so it was after a short 17 hour bus journey that we made it. The Whitsundays are beautiful and Whitehaven beach is exactly like it looks in the photos. This is where the rain hit though so we didn't do much sailing mainly playing cards and meeting new people, which is just as fun!
After Airlie Beach it was time to hit Townsville in time for Magnetic Island. This is home to the Koala sanctuary where you can get up close and personal to not just koalas, but also lizards, crocs and birds!
After Magnetic Island it was time to test our luck in Cairns. It was great as all the real gapers from the Sydney Intro met up again so we definitely made the most of the nightlife and activities there.
We had a Tablelands tour included in our bus pass which was amazing. The tour took us into the depths of the rainforest and to the infamous waterfall from the 'mysterious girl' video, so naturally, we did the hair flick!
After an amazing time in Australia it was a great way to end meeting up with everyone again. We're so sad to leave but very VERY excited to hit Fiji and the amazing beaches :-)
Until next time.
Melissa and Becky