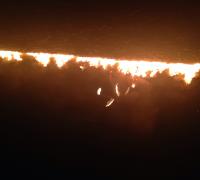 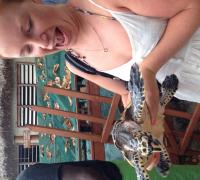 After we left the awesome staff at Coral View resort we made our way on the boat to Beachcomber island, the official party island of Fiji.
We were so tired after the emotional goodbye, the first night we just chilled in the 120 bed dorm room!! It certainly was an experience, there were no walls, just nets, and so many beds all in little clusters. Thankfully there were only around 20 people in the room so it wasn't too busy :-)
Our first full day on the island involved lots of sun bathing, relaxing and some turtle holding! There was a turtle farm at the resort and we got to see how they were being looked after and then we could hold them, awesome!!
That night we learnt the bula dance and then watched a Tina turner and Beyoncé impersonator, pretty surreal!
After beachcomber we made our way to South Sea Island, one of the smallest islands out of the 333 that make up Fiji. It takes around 6-7 minutes to walk round the whole island! We snorkelled, paddle boarded, went on a submarine, sun bathed and played monopoly. We caught up with our friend Joe who we met on coral view and then made some new friends who we met up with later on.
If you are after island advice, just pop us a tweet and we'll be sure to help. Here's some top tips though!
If you're after Manta rays, head to Manta ray or Barefoot resorts.
We heard really good things about Octopus and Korovo as well.
Blue lagoon is where the Brooke Shields movie was filmed, and you can do a boat cruise called Sea Spray which takes you to the island where Castaway was filmed. You can cry out 'Wiiillllssssoooonnn' and pretend to be Tom Hanks :-)
Any questions, just pop us a tweet :-)
Until next time.
Melissa and Becky