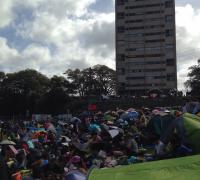 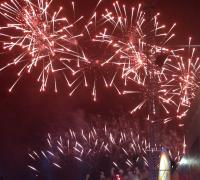 So we fulfilled our 2013 New Years resolution of seeing the Sydney harbour fireworks, and we were not disappointed, they were amazing!
Me and Becky were due to work New Years Eve at Luna Park, as they have a massive harbour party every NYE. But even though we were in work, we couldn't have been in a better location. We started work at 5:30pm, so before we got there, we went to meet our friends who had been camped out in a prime viewing spot in North Sydney since 8am that morning!! We made our way through the hundreds of tents and found them. They literally had one of the best spots going! After catching up for a few hours, we were sad to go, who would want to go to work when you can chill in the Sydney heat with the best view?
We were glad we did though! I was working selling glow sticks and other flashing things, whilst Becky was working in the bar. We missed the 9pm fireworks and the 10:30pm ones, but we were both allowed out just as the midnight fireworks started. They were incredible! This was the first year that fireworks went off from the Opera House as well. Amazing!
I finished at 2am so had an hour to enjoy the party, but Becky didn't finish until 3:30am so sadly didn't get a chance, but it didn't matter, it was worth it for the fireworks!
Hopefully you're New Years Eve was just as good, it could be you here next year!
Melissa and Becky