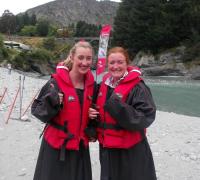 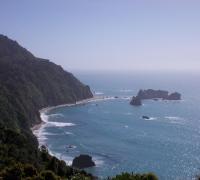 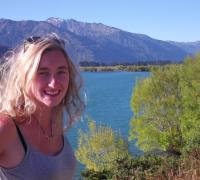 Who fancies a good old fashioned countdown? Hi there, it's Sophie again from NZ- and today I'm going to give you guys a top five of the stunning New Zealand!

After the destructive force of the Christchurch earthquake back in 2011, the whole city is re-emerging and the sense of community spirit is clear to see. As part of the re-development plans they have built a city mall out of shipping containers, which is completely awesome! The memorial '185 chairs' dedicated to the victims of the 2011 earthquake is very moving and definitely somewhere I'd recommend you visit.

Want to step back in time to the 1940's? After an earthquake in 1931, which completely levelled the city, the whole place was designed in the style of art deco, which was popularised at the time. However, If Art Deco isn't your thing, then maybe 'wool' rocks your socks? Napier is the largest producing wool nexus in the southern hemisphere... (random fact of the day for you there!)

If you're like me when you think of New Zealand, you think of pool's spitting out melting mud, steam erupting out of the ground and enough drama to give Eastenders a run for its money. Well, New Zealand (as a whole) isn't really like that, but as the geothermal capital of New Zealand, Rotorua offers a matrix of Maori culture, hot springs and geothermal pools. Make sure to check out Te Puia, where their most active geyser, Pohutu, can erupt boiling hot steam 30 feet up into the air three times an hour.

The calm before the storm of Queenstown. I didn't spend much time here (one evening to be precise) but there was a magical atmosphere, bolstered by independent restaurants, coffee shops and bars, all situated around a stunning lake. The locals were lovely, as were the backpackers we met in various restaurants. There is also an a puzzle maze designed especially for adults, which looked AMAZING.

... the world epicentre for adventure sports! Anything on your bucket list? You can quite easily tick it off here! Want to throw yourself out of a plan at 15,000 feet (Like my mother did) or jump off a bridge with nothing but a big elastic band attached to your feet (like I did)? Then Queenstown is the place to do it. Think yourself too much of a scardey-cat to do the above? Then the Luge offers a great alternative, allowing you to go up in a cable car and eat in the buffet style restaurant (which offers you much more impressive views than any sky tower). The atmosphere that embodies Queenstown is electric, as most people are either buzzing off adrenaline or are chilling out, either by the lake of playing frisbee golf in the park. The nightlife here is also the best in New Zealand, with mother and I taking a particular fondness to the Ice Bar, Minus 5.

Sophie's currently travelling around the world with Real Gap after winning our Ultimate Year Out competition last year. Make sure you pop back to hear more about her adventures around the world!