Party like a local: Festivals & events not to miss!

Ever wanted to combine your travels with an epic national festival? Well you can! We've mapped out some of our favourite events going on throughout the year in some top travel destinations for you to plan your travels around to make that trip of a lifetime extra awesome... 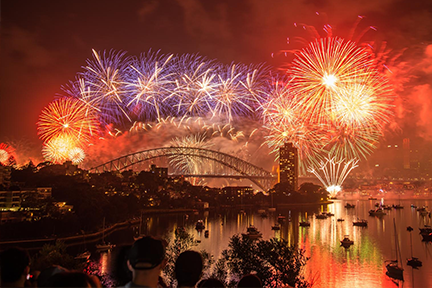 Want to make sure your New Year's Eve this year goes with a bang? There's really only one place in the world you should be then. Sydney's NYE celebrations include possibly the largest, and most famous, fireworks display on earth, and is nothing short of breathtaking.

RGE Travel Coordinator, Katie G, says: "I've never been a massive New Year's Eve fan - I've always found it a bit of a letdown, but there's a reason Sydney always tops the charts for best places to see-in the New Year. The atmosphere is buzzing; people camp out from 30th December to get a prime viewing spot for the fireworks! My friends and I weren't quite that prepared but we made our way to a quieter area in Mort Bay Park - armed with a picnic and plenty of beers! We pitched up for the day, with plenty of space and, most importantly, a clear view of the Harbour Bridge. Obviously the Sydney fireworks display is world-famous, and getting to see it for myself was definitely one of the highlights of my whole year abroad - especially as it was one of their biggest and longest displays to date (and I'm a sucker for fireworks!). Honestly, it's one of the most memorable nights of my life and if you get a chance to spend NYE in Sydney, just do it!"

Joining our Paid Work in Australia programme starting any time in the next three months will ensure your New Year's celebrations can take place in Sydney, but make sure you get in by our 11th December 2017 departure. 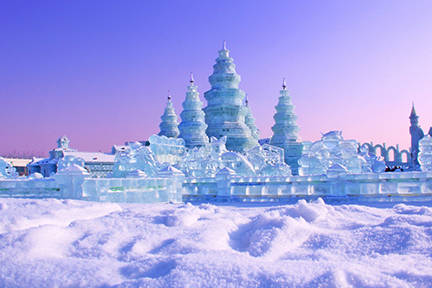 The largest ice and snow festival in the world, Harbin's epic annual event is quite a spectacle, and quite frankly blasts any other ice event out of the water, so to speak. With a different theme every year, talented sculptors travel from all over the globe to produce a winter wonderland unlike any other, ranging from full-scale world landmarks to mythical beasts, and everything in between.

Want to catch the Ice and Snow Sculpture Festival in 2018? If you're thinking of enrolling on our China Paid Teaching with TEFL programme, make sure you book onto the 11th February 2018 departure to be in Harbin on the same dates as the festival. 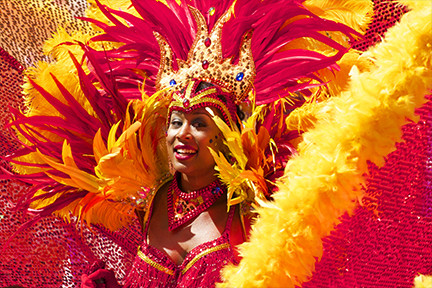 There are few people who would pass up the opportunity to be part of the biggest street party in the world, and the Rio Carnival is exactly that. Blending into the crowd here is easy so long as you come armed with glitter, fluorescent face paint, and sequinned hot pants - girls, you can go for the same if you like! Shake your hips, enjoy the samba beats, and live in the moment - it's one not to be missed.

Because this event is so epic, we decided to dedicate one of our programmes to the carnival in its entirety, you can read more about the fun you'll experience on our Rio Carnival Experience page. 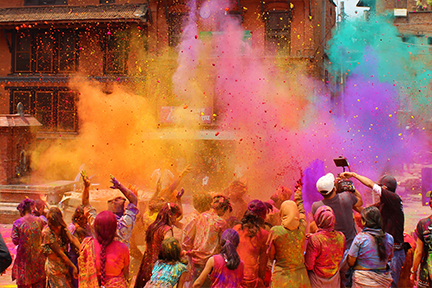 Holi is known the world-over for being the festival of colour, and is celebrated across India each year to commemorate the burning of evil demoness, Holika. Be prepared to get caught in the middle of huge and enthusiastic crowds, where you'll be covered head to toe in a variety of rainbow colours - no one leaves this festival clean!

Hannah J, RGE Marketing Assistant, says: "Holi is hands-down one of the most exciting and unique things I've experienced on my travels. The actual celebration lasted all day (we were up celebrating from about 9am!) but the festivities started a week or two before that with children throwing water bombs at us in the street! A handy tip (which might sound obvious but I learnt the hard way!) is don't wear anything you want to keep nice (even underwear!) as everything gets completely covered in colour - even my hair was pink for a good few weeks afterwards!"

A number of our India trips will have you in the country right on time to take part in the colour explosion; our Himalayan Volunteer & Yoga Experience programme starting on 24th February 2018 would put Holi right in the middle of your two-week trip. 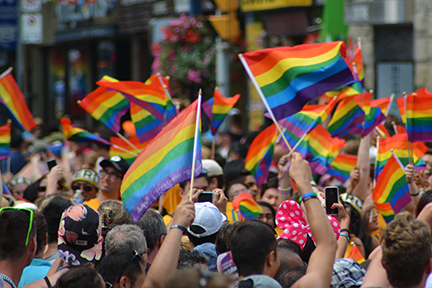 An event that's dominated Sydney Harbour and Bondi Beach in early March for the past decade is the Mardi Gras and Gay Pride parades, now attended by hundreds of thousands of people from Australia and around the world. The parades actually started in the late seventies, but have only attracted the crazy volume of people they do now in the past few years. Expect good vibes, interesting fashion statements, and imaginatively designed floats - it's a party on a scale all of its own.

Jane, RGE's Operations and Sales Director, says: "Sydney Gay and Lesbian Mardi Gras was amazing and so much fun! Thousands of us lined the streets to watch the colourful parade, the extravagant costumes and the incredible dance routines. The music was loud and there was a real party atmosphere. Everywhere you looked there were rainbow flags, people dressed in leather, body stockings, body paint, glitter, tiaras and there were also a lot of people who were pretty much naked! My favourites were the drag queens on roller skates, they got the biggest cheers as they skated by getting the crowds going. The atmosphere was great, everyone was happy, waving, cheering and really getting into it. Such a fun and memorable night."

Our Sydney Intro trip beginning on 26th February 2018 will have you in Sydney for the action in the evening. 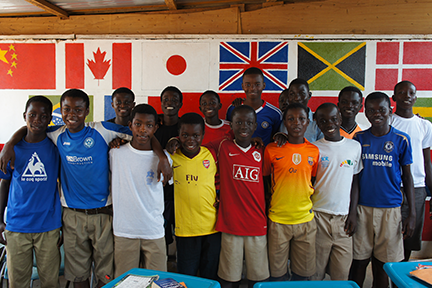 Celebrating an independent democracy since 1957, each year on 6th March Ghanaians gather in their tens of thousands in the capital to view military displays, watch parades and dances, and hear from their president. You'll see a huge majority of the locals in traditional dress, and get to experience a genuinely happy and proud atmosphere.

RGE Product Manager, Hannah D, says: "All the schools march for Independence Day, they'll march in their respective towns and villages and some are even invited to Independence Square in the capital, Accra. Often the marches include full marching bands - they'll march all around the local area, we had them pass our house a couple of times! Lots of people wear the Ghana colours (red, yellow, and green), wrapping themselves in flags, and it ends up as one big party!"

Any of our two-week Ghana volunteering programmes starting on 3rd March 2018 will have you there for all the action. 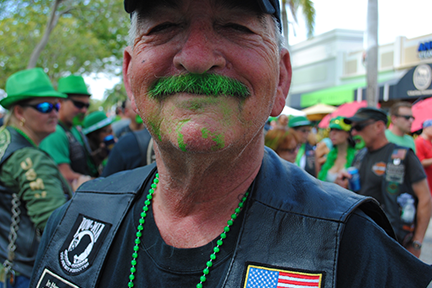 Ireland's patron saint is a well-known chap and, celebrated the world-over, you know you're in for a good time wherever you choose to celebrate St Paddy's Day, but New York has to be, by far, one of the most elaborate shows of appreciation for this saint's day. With parades and marches, big bands, fireworks, and of course the obligatory free-flowing drinks, it's a party that everyone get involved in.

Katie P, RGE's Operations Manager says: "The atmosphere through 53rd Street was incredible, the parades were loud and lively, with everyone getting involved - from police and fire fighters to the cub scouts, and the marching bands were brilliant to watch."

If you're on our USA Au Pair programme during that time and based in the New York area you'll catch the celebrations! 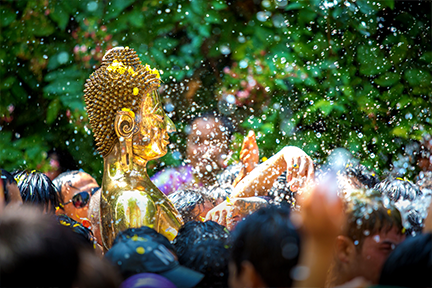 Songkran is Thailand's New Year festival, in keeping with the Buddhist solar calendar. Traditionally, water is used as a symbol of purity to wash away sins and bad luck before starting the new year ahead, and is poured over people's hands in temples and other venues across the country, which all sounds rather gentle - but larger cities, including the capital, take the water celebrations to the next level with elaborate water fights, ensuring everyone gets a good soaking!

RGE Travel Advisor, Emma, says: "It was fantastic! The atmosphere was buzzing and it was very much like a huge street party everywhere we went. Everyone celebrates by splashing water, so it's impossible to go without getting drenched, but it's so much fun. One of my favourite moments was when my friend and I were literally hanging off the back of a taxi truck whilst driving through the streets of Bangkok with people throwing water and coloured powder over us!"

Get yourself booked onto our Thailand Experience trip starting 5th April 2018 to make sure you're in Thailand over Songkran. 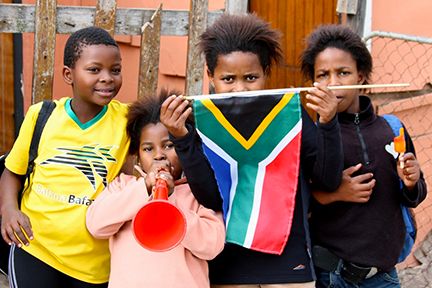 A hugely significant event in South Africa's history, Freedom Day marks the anniversary of the very first all-race democratic elections in 1994, ending racial segregation and establishing the new government led by Nelson Mandela. Celebrations always take place on 27th April, and include street parties, music, and a general 'coming together' in the community.

If you want to be in South Africa during the celebrations, all our Cape Town volunteer programmes over April would be a safe bet, as well as our Namibia to Cape Town Discovery trip (departing 14th April), which finishes in Cape Town on Freedom Day - the perfect end to any trip. 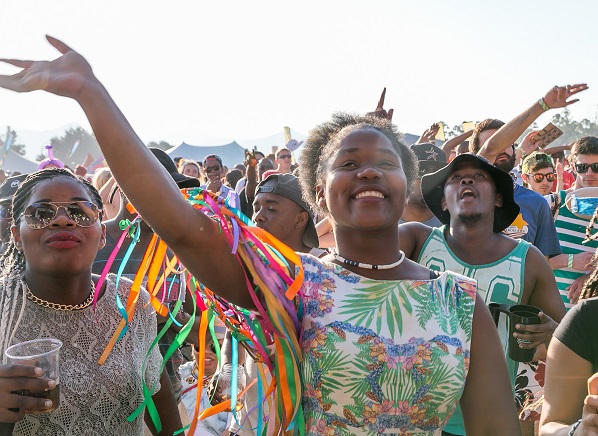 A huge three-day music event held in the beautiful and quirky grounds of House on Fire, in the Malkerns Valley in Swaziland, Bushfire Festival started out as a celebration of music, playing homage to talented local musicians, but it now sees hundreds of international acts performing for a massive and happy audience, and is named as Africa's largest inclusive festival. Promoting social responsibility, this event is about more than just the music, and all profits go to local charities.

Make sure you're in Swaziland to catch the 2018 line-up, our Kruger to Coast Volunteer Adventure departing 7th May will get you there. 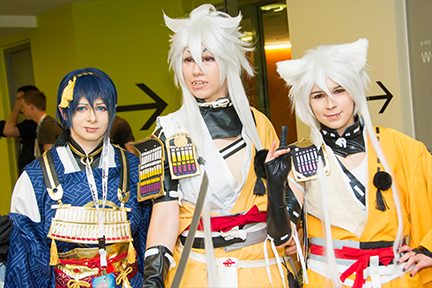 If you're not yet aware of the phenomenon that is re-enacting your favourite fictional characters' storylines, not only dressed as said characters, but absorbing their personality as well, then a good place to get 'acquainted' with the people involved is in Cosplay motherland - Japan. More than simply a convention, the World Cosplay Summit in Japan is an international championship, where teams from all over the globe compete for the world title with incredible performances dressed as some very recognisable characters.

If you're planning to stay on in Tokyo or Osaka for an extra week after the 15th July 2018 Journey Through Japan trip, you'll be in town for the world summit. 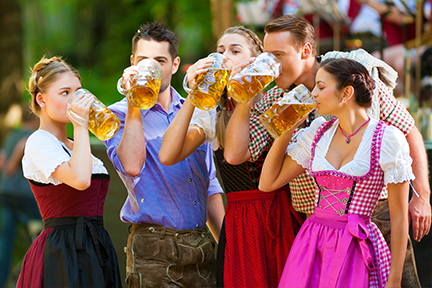 Oktoberfest needs little to no introduction, but despite what you might think, the festival isn't all about the beer. Well, it's mostly about the beer, but it's supposed to be a celebration of all things Bavarian, including the particularly awesome food, questionable country dress (lederhosen anyone?), and brilliant local music. Needless to say, if you're a beer fan, this is the festival for you -  hundreds of local varieties will be on offer, some brewed specifically for the event, just make sure you keep a well-lined stomach by filling up on some tasty Bavarian wurst first.

Book yourself a space on a trip that'll coincide with Oktoberfest in 2018 - our Grand European trip starting on 4th September 2018 will have you in Germany over the right dates.

Looking for more trip inspiration? The RGE team have travelled to more countries than you can shake a stick at and love helping you guys plan your world adventures, give us a call on 01892 277040, hit us up on live chat, or ping us an email at [email protected].