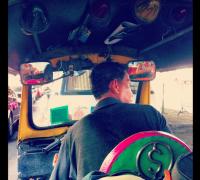 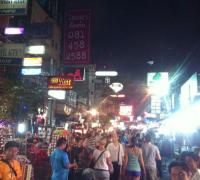 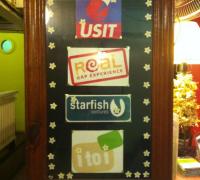 Over the past few weeks a few members of the RG team have been jetting off to some of our epic locations to check out our projects and experiences. Now's the time for Ben and Harriet to conquer Thailand- they're going to be travelling around and trying all things Thai for the next two weeks so expect updates galore from the troublesome twosome!

We're receiving LIVE email updates from Ben whilst they're over in Thailand; they landed on Tuesday and they've just spent the past few days in Bangkok! Want to hear all about their adventures? Have a nosey at Ben's first update below (it sounds SO awesome- let's all just head off to Thailand, yeah?!)

After an 11 hour flight from London to Bangkok, we arrived bright eyed and bushy tailed in the epic Bangkok at 7pm, and straight away we were hit with the biggest queue for passport control in the world. Just our luck! By 8:30pm we had collected our backpacks and swooped off to our cabs, I wish I hadn't of packed sooo much- I'm not used to carrying my life on my back! I was really missing my suitcase at that point, wheels should never be taken for granted ha!

As we weaved our way through the crowds to the cab hub on the edge of the airport, we were hit by the humidity and the extreme heat. 'Wow we are finally here' I thought- you could smell, feel and almost taste the culture straight away! We took the taxi from BKK, which cost 1300 THB and took only 45 minutes, to get to our hotel. We've been staying at the Sawasadee Koh San Inn which is where all the Thai Exp, Bangkok to Beaches, Island Hopping (etc...) Real Gappers stay for the first 2 nights before they head off on their own adventure. It's got a fantastic central location, and has a chilled out vibe about it so we felt at home straight away! Harriet and I were both in desperate need of a shower when we checked in so we wasted no time in getting into our rooms so we could freshen up and then head out for dinner and a few drinks. My immediate thoughts? The room was great- a little basic but exactly what we needed- double bed, clean, a fridge and TV - BAM!

We headed out for dinner around 10pm and had Pad Thai which cost 120THB (about £2.50) and a few beers. Everything is SO cheap in Bangkok- we walked up and down Khao San Road slowly- people watching as we went, dodging the mopeds and lapping up the local culture. Some of the bits the Thai people were selling was a 'little bit' different to what you or I would expect to find in our local Sainsburys- fried scorpions, fried frogs, fried spiders.... and I could go on! We had a few more drinks in a couple of bars and then we jumped in a tuk tuk and headed to Pat Pong NIght Market, had a wander and had a couple more drinks, wahay!

We eventually got back to the hotel around 1:30 am and we were both shattered so said our good nights and then hit the sack!

Next stop? Our first full day in Bangkok baby!