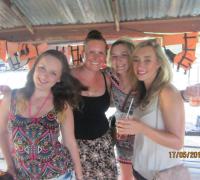 After the craziness of Bangkok, it was time to pack out rucksacks and get on the road to discover the 'Real Thailand'...

We got picked up just outside our hotel (such a luxury- definitely preferable than dragging your heavy bags through the streets, begging for a Tuk Tuk that won't rip you off!) by a coach that looked like it was made by the Barbie Factory. On the outside, it had cartoon characters all over while we had a pink plastic interior, adored with blue and pink frilly curtains! The decor, as well as the effects from last nights buckets' meant it was going to be a surreal ride!

We went straight to the village of Kanchanaburi, as it was only a few hours away, giving us a good chance to either kick, back and relax with the film that was playing (The Expendables- incase you're wondering) or a good catch up with everyone after the craziness of Khao San Road. When we arrived, we were greeted at this large hotel, which again, seemed like luxury compared to cramped hostel rooms (we even had our own fridge- perfect to keep your drinks cool in the heat!). On our first night here, we enjoyed the scenery and swam in the village pool before having dinner (which was paid for- winning!) overlooking the River Kwai. After being well fed, a few of us went out to the town (via taxis that apparently the Thai's called minibuses- but minus walls and doors!) to shoot some pool and drink some beer, before heading back for a midnight swim in the pool.

The next day, in true Thai tradition, it was boiling (hovering around the 40°c  mark)! And the best way to cool off in the heat? Go on a gigantic trek in the midday sun! Not the answer you were expecting?!? Well, what if I tell you, dear reader, that this trek was interwoven between 7 different waterfalls at the beautiful Erawan National Park?!? Knowing that you were going to be greeted by an ice cold, milky pool at the top of the seven falls made all the sweating and scrambling over rocks worth every second. When we finally reached the top, we all dived straright in splashing and jumping around- not just because the water was such a reward, but because all the fishes were biting the hard skin off our feet- a very weird feeling! On our way back down, we had a quick stop off at another pool, which had a large rock you could clamber up, then slide down- much like the rocks in Cairns. This was so much fun, that even the most reluctant were soon sliding in!

We soon made it to lunch (just a choice of simple foods- rice or Phad Thai), but as we were leaving, we saw black clouds on the horizon. As we are entering monsoon season, this isn't uncommon, but, as we got home, the heavens opened, and we were treated to a magical storm which lasted around 4 hours. You might have thought this would put a dampner (excuse the pun!) but the lightning rods and the loud claps of thunder were a spectacle, a true memory to behold.

With the weather, also brought some interesting fashion wear, with many people sporting their trusty kagools, and those who hadn't read the supplied kit list, bin bags! We headed out in our trusty taxis, which still had no walls, doors or roofs (not the best for the rain- but we survived!), before having a group meal and dancing the night away in the local bar, called Sugar Bar!