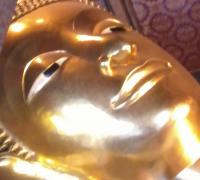 I've been visiting temples galore during my time on the Thailand Experience, so thought it was about time I filled you in on what I've seen so far!

In a country where (according to the last census) 94.6% of the population described themselves as Buddhist, you would be correct in thinking that Thailand is littered with stunning temples and shrines. Wherever you go, be it a small rural town, a motorway service station, or deep in the heart of the city, you will soon be blinded by glittering roofs, taken back by the size of gold buddhas and fallen in love with the brightly coloured elephants guarding the shrines.

The Thai’s take their religion very seriously, with a Monk being a person of great upstanding in the community (they even get their own special lounge at the airport!). In Buddhism, a monk is not allowed to touch, talk or look at a female- to do so  is considered a sin. So, while on various visits to temples around the country where we are blessed by Monks, we are very cautious to respect their beliefs. The girls on the group keep our shoulders and knees covered and discourage eye contact. When the Monk presents gifts to us (we have been kindly given bracelets and necklaces) we are to place our palms out, so the Monk can drop them into our waiting palms, whereas the Monk will place the gifts gently into the boys hands. We always let the boys go first when receiving these gifts, as a mark of respect- although this has raised some questions concerning gender equality amongst the group!

While at Tiger Temple (the original TT, not where I cuddled and played with Tigers), we were given a meditation lesson  by a monk. This particular day, we had done a lot of temple viewing, and the option to sit in an air-conditioned room, in silence with your eyes closed, proved too much of a temptation for some, and we soon heard some snoring penetrating the room! While with this particular Monk, we learnt both walking and sitting meditation- via video instructions! Walking meditation is particularly strange, as it literally involves you putting one foot in front of the other very slowly saying ‘walk... walk... walk’ every few seconds in a slow hushed voice. When it was time to turn a corner you could have to stand for several seconds saying ‘standing... standing... standing’... Before turning in the direction of travel you now wanted to head off in ‘turning... turning... turning’ (I think you get the gist now!). In sitting meditation, the aim of the game is just to keep repeating the word ‘sitting’ in your head, focussing your mind on that one word and not letting it drift off- very strange. I am not sure if I am cut out for meditation as my mind was fully on my dinner!

While on the Burmese border we visited some more temples, which are slightly different from Thai temples, purely because the faces on the Buddhas are classically more Burmese looking. Right outside our hotel were examples of the size of the roadside shrines to their Gods. Here we have another version of the reclining Buddha- much like the original one we had visited in Bangkok!

At Wat Wang Wiwekaram temple in Sangkhlaburi, which we went to after our community project was finished and accessed by crossing the second largest wooden bridge in the world, were the donations presented to the temple. But, instead of presenting them in a demure way, or simply putting the money away, they had decided to make money trees out of their donations- adding to Thailands true eccentricity.

It is definitely worth it to see and talk to those who have committed their lives to their religion, to view the art work on the walls which tell the stories behind their Gods and to be blinded by the extreme colours which they are all adorned! I am just so excited now to see the Cambodian Ancient Temples of Angkor now, these temples have just wetted my travelling appetite!