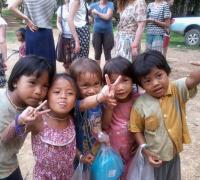 Hi guys! For the next part of my diary, I wanted to fill you in on the volunteering part of the Thailand Experience...
We were staying in the north of Thailand- Sangkhalburi during our volunteering stint, and there are a large number of poorer people living in the area. I wanted to be able to understand their hardships and their stories, so I chose the community option when I was booked onto the trip.
And I'm so glad I did! After a bumpy ride in the back of 4x4 pick up trucks, we finally arrived in a collection of bamboo huts, home to the Matteu tribe. Here, our local leader called Aman, rounded up all of the excitable children, who greeted us with smiles, waves and hugs the second we got out of the pick up truck.
Straight away, the children showed us a dance they had prepared for us, then it was really left up to us in order to entertain them, with both Aman and the children wanting to experience Western games and songs! Here the boys in our group really came into their own, with Felix teaching children the Hukka, Ollie bringing a wildly infectious song called 'Mango Tree' into our lives and Usman creating a gang of little mini rappers. Throughout the week, the Hokey Cokey also became popular, with lots of children just wanting to be thrown in the air, as were any games with balloons (often favoured at children's parties).
Every day we had a similar routine when working with the children. At 7am, a group of us would head to the market to shop for the food we were to prepare for the children later on, before leaving at 9am for the village. There we would play games, read and colour for the morning, while 2 or three of us would help our tour leaders cook the food by the river. The food we cooked was always well received; cooking everything from Thai Green Curry to Thom Yum, to Thai Omelettes. On the day I helped out, 5 of us spent over an hour and a half making dough balls to make into a traditional Thai pudding, peeled what seemed a million shallots and thinly chopped Spring Onions! Around 1pm, we would always hear the drumming of excited young feet, banging their metal bowls and cups, rushing towards the glorious wafting smell of just cooked Thai food.
After the children's belly's were full, we often swam with the children in the river and were impressed by the natural speed and strength of even the smallest child in the water.
In the afternoon, we often completed arts and crafts, such as the children making bracelets or hair braids, where they were much more talented at the simplest task than most of us adults. It was here a 2 year old ended up taking a bunch of material off me, as my knot tying skills were so inferior to her own! Definitely a taste of humble pie came my way that afternoon.
On our final day, three girls from our group took control of the present buying, Holly, Immy and Nat! We had all decided the day before that we wanted to get something long lasting for the children, with bowls, spoons and cups, being top of our list. In addition, we also brought hair scrunchies, toothbrushes & toothpaste and some toys, which included their favourite- bubbles! Both the children and the parents of the children were grateful for our contribution, in both the form of the presents and our own presence for the week.
It was a brilliant experience, with nearly everyone calling it their favourite part of the trip. Seeing people live in such conditions, yet still being so happy, was a humbling experience. These are children wanting to learn everything they can. By communicating with them through song and language, you know that we have managed to pass on some of our skills (and they have passed on some of theirs) which shall help them through life.