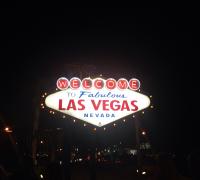 Hi everyone! Following our Fiji adventure we were off across the pacific to the hustle and bustle of America! Booked on the 21 day USA experience we had a few days to chill in San Fran before we started in LA.
Day 1
Met the group around 7:30am in downtown LA for a quick get to know each other sesh and it was time to hit Hollywood boulevard :-)
We saw the walk of fame, the oscars theatre and the famous hollywood sign.
After it was the start of a long 5 hour drive to VEGAS!
To really get to know each other, we had a party bus booked so we could see the sights of Vegas and have a few drinks on the way :-) the bus lasted around 2 hours but sadly I had a few too many and was in bed by 11pm. Not the greatest first impression!
Day 2
Thankfully everyone thought it was pretty funny so it wasn't too embarrassing in the morning. We had a full free day in Vegas today so explored the strip, the casinos and then had a massive buffet and saw a comedy show in the evening, before heading to a pool party until the early hours of the morning!
Day 3
It's time to head out of the fancy hotel and gambling life to Zion National Park! It's like something out of Star Wars, not seen anything like it before. We had our first camping experience and cooked up some burritos and before going for a nice walk through the park.
Day 4
The keen beans of the group got up at 6am to do the insane Angels Landing hike, however me and some of the group had a lovely lie in and then walked through the river on the river walk.
That afternoon we headed to cowboy camp! Now in Utah, there was the option to go horse back riding and then we all indulged in a lovely steak dinner and settled in for some drinks for the night. We played some killer rounds of uno and then dirty Jenna, plus a quick grand national thrown in there as well!
The thing about camping we realised that night is after a few nights it's very uncomfy! The countdown for New Orleans and the hotel has started :-)
It's a great group of people on the trip and everyone's getting on really well! It's a great way if travelling along to meet new people, and it's great if you're in a group!
Will fill you in on how the camping goes :-)