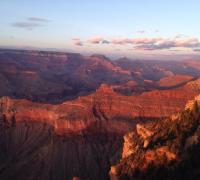 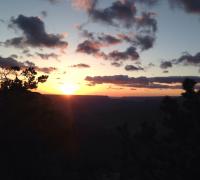 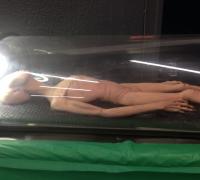 Here's the next installment of the antics that go on when you take part in the USA Experience :-)

We're off to the wonder that is the Grand Canyon! After a short-ish drive we all put pillowcases on our heads or other forms of blindfolds on and got walked to the edge so we could have an uninterrupted first look at the canyon, and it was fantastic!! One of the best things I've ever seen!

We got to camp and set up the tents then got ready for a walk round the canyon. Be warned, it gets very chilly at night there, hitting lows of -3 degrees! Hoodies and blankets are a necessity. We learnt a trick of filling up water bottles with hot water from the kettle and putting it in the bottom of your sleeping bag. Very handy!

Today was a free day to explore the canyon. We walked to a point called 'ooh ahh' point, and it really was awesome! You have the option to go on a helicopter ride over the canyon, which some guys from the group did and said it was amazing! After we walked through the national park and then headed back to camp to get ready for pizza night in the local town.

Off to monument valley today for a jeep tour round the iconic park! It was like being in a scene from Star Wars or Transformers. That night, we were treated to a night of traditional Native American food and dancing which was really cool. We then slept all together as a group in a traditional mud hut. It sounds a but much, but they keep the fire going all night so it's so warm compared to the last 2 nights!

Very early start of 5:30am to go and see the sun rise over the valley which was amazing, then it was off to Sante Fe, but not before a stop in Roswell for the infamous alien museum! It's actually the worst museum I've ever been to, but that's what makes it the best!  Definitely a must do.

About this part in the trip, the camping starts to get a bit tiring, especially if you're not a seasoned camper like me! But just remember, New Orleans isn't too far away and that means a hotel :-) you can do it!

Tune in for the next update!