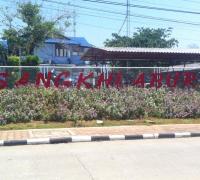 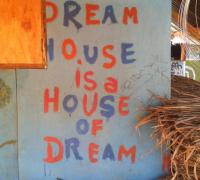 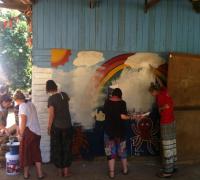 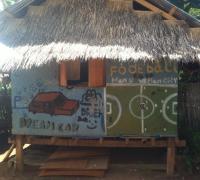 It's Ben again! Jungle action, anyone?

After being woken up at 5am by dogs barking and cockerels cocka doodle-dooing, I remembered that I was in the jungle, in a tent, in a house! So random yet so incredibly awesome! I eventually crawled out of my sleeping bag at 6:30am, more than ready for a massive cup of coffee (after 7 Changs the night before believe me, I needed a dose of the good stuff!). I made my way downstairs to find a few of our group already up, watching the sun come up over the beautiful jungle. We all then sat around and chatted about the previous day and night; it had been the best of our trip so far and we'd had such a good time.

After breakfast the group headed off for another day teaching at the English summer camp, and Harriet and I said our goodbyes (...it was the last time we'd be with the group, sad times!) and we headed back to the Seedan hotel in Sangklaburi to help out at the childcare centre. When we got back to the hotel Harriet decided to catch 40 winks, and so I grabbed a coffee and got down to some serious shopping (have I already mentioned it's so cheap out here?! Ha). At 1pm we met some of the other guys and then took a 20 minute drive to the childcare centre. We arrived and the children were all still at school as they finish at 3pm this gave us time to crack on with some serious work before the kids got back! Harriet and a few of the others helped out in the kitchen to help with dinner- one of the volunteers, Max an American guy, was treating the children to western style food- BBQ chicken, mash potato and salad! YUM.

A group of us then started to crack on with some painting- we were outside painting the walls white so that the children could decide what picture they wanted on there (it'll look so good when it's all done!). After a successful prep of dinner and 2 outside walls painted the children had come home and were all excited about heading to the lake to go swimming, so before we knew it, 15 minutes later we were down at the lake and the children were laughing, swimming, splashing, jumping off of a hill into the water and generally just having a great time!

We stayed there for an hour and then headed back to the house so the children could have there dinner (they loved the American inspired food!)- the majority had seconds! I did a third coat of paint on the walls whilst the guys were playing in the garden with children. Then 6pm came round so quickly and it was time to say goodbye! By the time we'd swooped back to the hotel everybody was shattered, so we all decided to opt for street food for dins. 20 baht for 2 big chicken skewers with sauce and 10 baht for a chocolate roti (pancake) so 30 baht and dinner was done and dusted! That's roughly 70p!!!! BARGAIN. Harriet and I are heading back to Bangkok tomorrow for 1 night before we hit the islands for some party time, so we decided to be sensible and get a reasonably early night! Our trip to Bangkok tomorrow is by coach and takes approx 8 hours all again for the bargain price of 280 baht which if just over £5 (for an 8 hour journey = amazing).

Next stops are: Bangkok for 1 night, Koh Tao for 1 night and then 3 nights on Koh Phangan where we will be lucky enough to experience the 'Full Moon Beach Party'- can't wait!